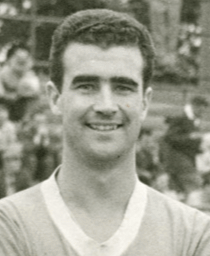 James Cairney was born in Glasgow, Scotland, on July 13, 1931. He started his career with Shawfield Juniors. As a 17-year old he joined Portsmouth in the Football League in September 1949 as a half-back

Despite showing much promise Jimmy failed to play in the Football League for Portsmouth. However, his good play for the Portsmouth reserve side made York City manager Sam Bartram sign Jimmy in the beginning of July 1956. Jimmy played in 53 Football League games for York City.

In April 1958 Jimmy accepted an offer to play for the Polish White Eagles in the National Soccer League. After the season many of the star players of the White Eagles fell out with the leadership of the team. Jimmy starred for Toronto Sparta in the 1959 season. In the 1961 season he helped Toronto Roma win the National Soccer League championship. He was also picked to represent the NSL All-Star team.

After playing in Canada Jimmy played for New York Ukraina in the German-American League in New York. In September 1964 he joined the Hartford Soccer Club in the American Soccer League.