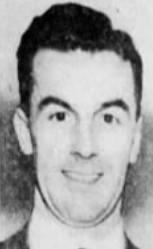 Alexander Shaw was born on November 22, 1924, in Glasgow, Scotland. He started his soccer career with Strathclyde Juniors. During the Second World War he served with the Royal Air Force.

The 5′ 3″ inside forward was signed by Crewe Alexandra manager Frank Hill in the summer of 1946. He played in 13 league games and scored 4 goals for Crewe Alexandra in the Football League Third Division North in the 1946-47 season.

In July 1947 Alex joined Southern League club Lovell’s Athletic. The club was a Newport based work’s club. They finished in sixth place in the 18-team league in the 1947-48 season. Alex was a great fans favourite with Lovell’s Athletic. He returned to Scotland in December 1949 when he was offered a job as an insurance collector in Glasgow.

Back in Scotland Alex had a trial with Stirling Albion before signing for Dundee United in February 1950. He was mostly used as back-up for the outside left position at Tannadice Park. Alex played in 12 league games and scored 5 goals for Dundee United in the Scottish League Second Division before being released on a free transfer in May 1951.

Alex moved to Canada in 1951. In Toronto he joined the St. Andrew’s club that were members of the National Soccer League. He was regular member of the National League and Ontario All-Stars in the coming seasons as a half-back.

In 1955 he joined Toronto Thistles and won the Toronto Metro League championship, the Innes Memorial Cup and the Toronto Daily Star trophy with the Thistles. Alex was voted as the Metro League’s Most Valuable Player.

The following season he helped Toronto Thistles qualify for the Dominion Cup semifinals. In an upset win Winnipeg Germanias defeated Thistles 4-1 in the sudden-death semifinal held in Winnipeg on September 13, 1956.

While a member of Toronto Thistles Alex was picked for Canada’s World Cup Qualifying squad in 1957. The Canadian National Team was trying to qualify for the World Cup finals that was to be held in Sweden in 1958. He played against the United States National team in St Louis, Missouri, on July 6, 1957. Canada defeated the United States 3-2 in front of a crowd of 1,500.

Alex then acted as the player coach of Ulster United in the National Soccer League. After retirering from active soccer he became a youth soccer coach in Guelph, Ontario.